Now everybody, untill you freak out; I'M REALLY FINE! Hopefully the headline didn't scare anybody. : D

As some of you know, I'm currently a Cosmetician student, but my other goal is to enter the MUFE (Make up for ever) academy at some point as I have graduated. I'm really into all of the dramatic photoshoot makeups and SPECIAL EFFECTS... I just have to get the money also for the academy...... Well that's the problem for later. :D

Here are some bruises that I did. Now don't be too critical, 'cause first of all these are my very FÍRST bruises I have done ever. And on top of that I don't have ANY professional products. Meaning like a cream based products specially made for creating bruises and etc.

All of these have been done with using a eyeshadows and some liquid blush. (Mainly the BH Cosmetics 120 palette.) 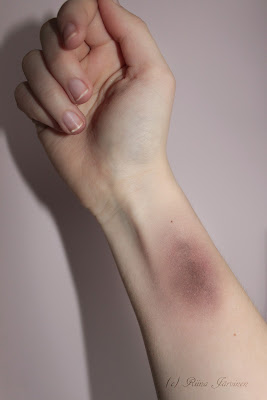 This is a first bruise I have ever made. It's too symmetrical and maybe too purple also. :D 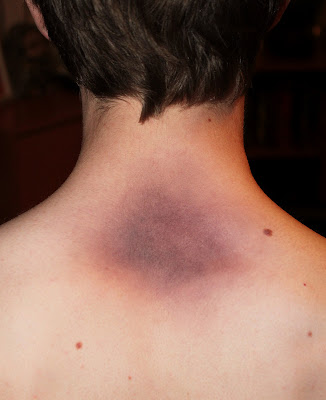 My second bruise I made to my brother. It's also too symmetrical, but hey!! His FB friends were asking what the hell had happened to him, so it must be good! haha :D 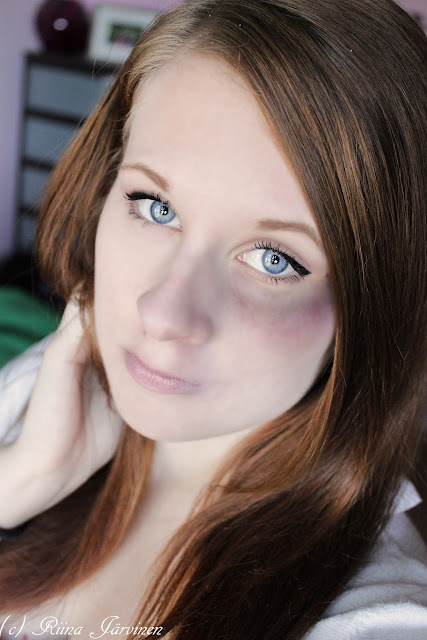 And last but not least, the bruise I made for myself. ^_^
I tried to look my real bruises so that I can try to copy the color, but It didn't work so well... All of my real bruises were so small and... old (brown and yellow). Although now that I think of it... I rarely have those kind of 'fresh', purple/blue bruises! :O
Have to practise yet! And also it would be nice to have proper equipment for special effects. :)

Feel free to leave comment or e-mail to me!
Remember to subsrcibe, if you're not already doing so! :)
﻿
Posted by Lil Rin at 7:03 PM

Me, Mysef and I

E-mail me if you have comments, questions, suggestions, ideas... Or if you just want to say hi. (Please no vulgarities)
Lilrin.blog@gmail.com

(I write in Finnish and English :))

Everything I say in this blog about products that I use, are my PERSONAL opinions. I'm also honest with my opinions (I'm NOT paid to say something). BUT this doesn't mean that if I don't like someting, you shouldn't either!